The wreck
is a fact.
The worst
has happened.
The salvage trucks
back in and
the salvage men
begin to sort
and stack,
whistling as
they work.
Thanks be
to god—again—
for extractable elements
which are not
carriers of pain,
for this periodic
table at which
the self-taught
salvagers disassemble
the unthinkable
to the unthought. 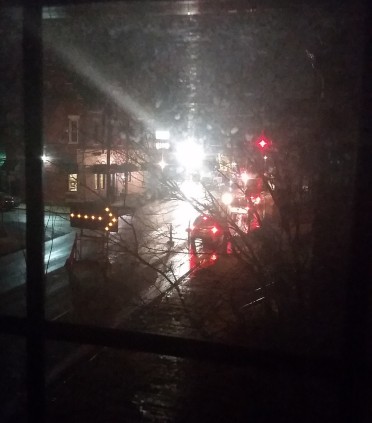 What I love about the lyric above by Kay Ryan is how much complication it holds in its short lines. Between casual observation and straight fact, there are worlds living side by side. The “unthinkable” happens, then others get to “whistling as/they work.” Poems like these show the necessary work of poets and their asbestos gloves, able to hold volatile and conflicting materials via imagery and metaphor, and make from them a flash and foundation of understanding.

Ani and I have been going through our own process of “salvaging” what we can from the “unthinkable” for about a week now. Last Friday evening, round-the-clock construction began at the intersection near us. Above is a photo taken around midnight Saturday. That’s a spotlight lighting the way for the poor guys out there doing their job. There was a brief respite from Sunday night til Tuesday morning, when work started up again. By Tuesday afternoon, we had this scene: 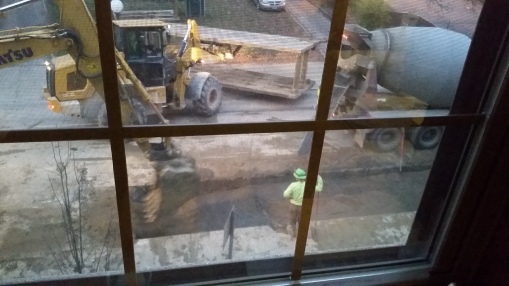 Count’em: that’s three heavy-duty machines moving around, rattling the apartment building, making us feel like dinosaurs are roving outside our window. This stage of construction is only from 8:30am til 5:30pm each day. At night, steel plates are lined up along the street which sound like thunder every time a car passes over them. THOSE we hear at night.

Each of us is coping as best we can. Ani’s begun coming up with stories about “Mr. Scoopy” and I keep wondering if these guys will get the holiday off next week. We’re told the work should be done by Christmas Eve. We’ll be in “salvaging” mode til then. 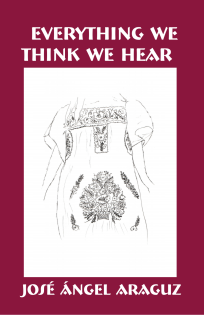 Speaking of things under construction, things have cleared up regarding my new book, Everything We Think We Hear. It is officially available on Amazon (again)!

I’ll keep bookending the Friday posts with book info throughout December. I’m happy to report that I have booked a few readings in my hometown Corpus Christi, TX in March. Also, I have some news about things coming up in Spring 2016. More details on all of this soon!

2 thoughts on “* salvaging with kay ryan”