As I work out of the echo of last week’s exams, I continue to have thoughts along the lines of fragmented narratives and ways of making use of what’s called in media res, which translates roughly as “into the middle of things.” It’s a phrase I picked up while reading Shakespeare: we first meet Romeo as he is in between relationships (I always forget that some serious moping opens up that famous play about love: kind of foreshadowing, no?).

I also see the term in media res as summing up how we understand ourselves. We are born into the middle of our parents’ lives; we read poems in the middle of different stages of our life; we eat, uhm, sandwiches in the middle of the day – and from these moments begin to cobble together the narrative pieces that make up who we are.

One of the ways this concept is worked with in lyric poetry is the sequence, and one of the great practitioners of which was Galway Kinnell, whose lines do the careful and exacting work of establishing moments and threading them together towards a greater whole.

Coming back to this week’s poem, there’s some sonic repetition (flop; feathers; flames) throughout the piece I hadn’t noticed before, and it’s telling how those sounds are absent from section 5. The difference, while subtle, does much to make the feeling of that section stand out against the rest. Each stanza, ultimately, plays image and moment against each other powerfully through such distinctions. 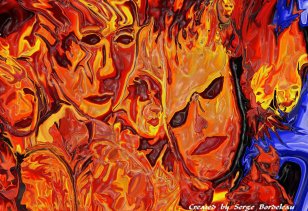 Another Night in the Ruins – Galway Kinnell

1
In the evening
haze darkening on the hills,
purple of the eternal,
a last bird crosses over,
‘flop flop,’ adoring
only the instant.

2
Nine years ago,
in a plane that rumbled all night
above the Atlantic,
I could see, lit up
by lightning bolts jumping out of it,
a thunderhead formed like the face
of my brother, looking down
on blue,
lightning-flashed moments of the Atlantic.

3
He used to tell me,
“What good is the day?
On some hill of despair
the bonfire
you kindle can light the great sky—
though it’s true, of course, to make it burn
you have to throw yourself in …”

4
Wind tears itself hollow
in the eaves of these ruins, ghost-flute
of snowdrifts
that build out there in the dark:
upside-down ravines
into which night sweeps
our cast wings, our ink-spattered feathers.

5
I listen.
I hear nothing. Only
the cow, the cow of such
hollowness, mooing
down the bones.

6
Is that a
rooster? He
thrashes in the snow
for a grain. Finds
it. Rips
it into
flames. Flaps. Crows.
Flames
bursting out of his brow.

7
How many nights must it take
one such as me to learn
that we aren’t, after all, made
from that bird that flies out of its ashes,
that for us
as we go up in flames, our one work
is
to open ourselves, to be
the flames?

2 responses to “* sequencing with galway kinnell”