This week, I had the opportunity to talk poetry at the Alice Hoffman Young Writers Retreat which is held at Adelphi University. We wrote about the moon a la William Stafford’s qoute, and used that exercise’s focus on performance and attention to talk about various approaches to lyrical prose.

It was a great group who asked me questions ranging from what kind of sandwich I would be and why (the answer: French dip, because it’s a plain sandwich, just bread and meat, but it’s transformed in the eating, the dip into the au jus sauce before taking a bite making it a little funky, as I try to do to mine own plain words and self), to what role does place have in my process. The answer to this latter question is complicated. I mean, when by the mountains in New Mexico, my poems tried to stretch like a range across the horizon; when in NYC, my poems tried to match the heights of skyscrapers. But when it comes to my books, there’s a little bit of everywhere and everything in each. We carry our places with us as much as our stories.

I thought of this as Rob Linne, who was kind enough to invite me to talk at the retreat, introduced me by saying that I was from Corpus Christi, calling the city one of his many hometowns. Something about that phrasing and sentiment continues to feel right to me days later.

Much of the talk revolved around me reading poems from my book Everything We Think We Hear, and then tying in the little lessons each poem gave me as I worked towards a final draft, lessons about lyrical prose as much as life.

One poem from the book I had planned to but didn’t get a chance to read is “Old Love.” This poem’s first draft came from a dream where I heard the final lines in my head and lived out the final image of talking into a baby carriage. I literally stumbled out of bed and those lines down, but it took a few years to really to where the poem wanted to go. While a lesson in waiting, this poem also became a lesson in honesty,  which requires its own waiting sometimes.

When I dream of an old love, I let it ride, having already broken off what connected us, and not wanting to go through it all again. I drink my coffee the way they would remember me taking it, for some light and sweet, for others black and with a comment on how I can’t believe how long it took me to take it this way, undiluted, untampered, bitter. With a heat on my tongue, I listen to old love, let my mind wander more than I did when I was with them, knowing I have had this conversation, feeling the answers give over as accommodating as leaves to sunlight. With a green on my tongue, I inevitably mix up the conversations: ask after the father of one whose father was never around; whisper an inside joke I realize too late I never shared. When old love looks at me lost, I ask, Where did you get those, and point sometimes to a set of bow and arrow earrings, sometimes a pair of toucans tattooed on the inside of an arm. Stories of boutiques I paced politely. Stories of a childhood fascination with colorful birds. Don’t you remember? When we run out of small talk, I find myself pushing a baby carriage in which old love has fallen in. Helpless, I look down, only to hear myself doing baby talk, shaking my head, waving my hands, emphatically repeating words, and, in general, speaking in such a way I know I cannot ever make myself understood.

This weekend is CantoMundo. I’ll be participating in one of two CantoMundo readings in Austin, TX, details below. If you happen to be in town, stop on by – it promises to be a great time! I’ll be part of the group reading on Saturday. 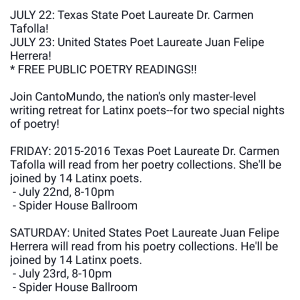