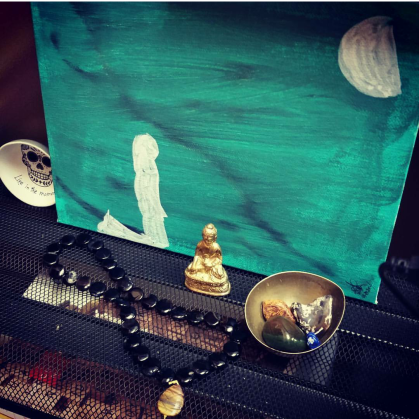 The photo above is of my work desk at the Cincinnati Review office. The moon painting featured here was one of the first my wife worked on during our time living in Cincinnati. Her artwork inspires me, which is one of the reasons why it is featured on the covers of four of my chapbooks as well as on the cover of Everything We Think We Hear. Having an artist in the family means I get to come home to paintings mid-process on her desk. When this happens, the idea of “work-in-progress” becomes a physical metaphor in our living room. This definitely influences my thoughts as I work at my own desk.

I share this photo because I wanted to make the most of the fact that my wedding anniversary falls on a Friday this year. This week’s poem was also chosen in this spirit. Below is my poem “Arguing for the Stars,” which was originally published in Kansas City Voices in 2015.

We never really settled on a solid reason why we chose to get married right around the beginning of autumn. Could be all the stirring elements and changing weather. This poem, I like to think, has some of that as well.

In the Egyptian Book of the Dead
there are those who believed the night sky
to be an iron plate, stars torches
hung over the world,

and those who believed the night to be
a goddess adorned in stars. Between
torches and jewelry believers
argued, side by side,

their voices dying down as the dark
grew, leaving only silence and those
points of light above them holding still.
There are nights you point

out a star, and without looking I
say it is a plane, a satellite,
something other than what you say. Such
is my disbelief,

not in stars, but in being able
to see anything clearly from here.
You argue for your stars, and your words
help me. The night sky

fills again with what
you would have me see.