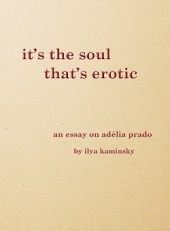 This opening note on mysticism’s accessibility and ubiquity quickly frames his analysis on Prado’s work within an argument that feels familiar within poetry circles. Replace the word mystic with poetry in the above statements and one finds the divide to be similar; both mysticism and poetry are regarded with mistrust by some non-practitioners (not to say non-believers), a mistrust that ranges from veiled skepticism regarding the respective value of each, to outright dismissal. To push this comparison further, mystics and poets are equally defined by practice: a mystic is only a mystic when voicing their spiritual truth, and a poet can only be called so via the creation of a poem. Or, to put it another way, the poet is by no means an embodiment of poetry any more than a mystic is the embodiment of truth: both are fingers pointing to the moon.

Navigating this fine line between the ineffable and the practical is not only the work of the mystic and poet, but also of the critic. Kaminsky does a great job throughout this short essay of establishing a sense of the traditions Prado’s work is in line with, both mystically and poetically. On the mystical side, the references range from the philosophical (Emil Cioran) to the spiritual (Paul Tillich; Martin Buber); on the poetry side, a reference to Czeslaw Milosz leads to references to Whitman as well as Mayakovsky, Anna Swir, Allen Ginsberg, and a number of other singular poetic sensibilities. This diverse catalog of associations is handled in a way that places them in the reader’s grasp; Kaminsky eschews any kind of intellectual name-dropping by inviting the reader into what informs his own personal reading of Prado’s work and the stakes such reading creates.

This engaged meditation on the mystical and the poetic serves not only to make clear Kaminsky’s own take on the work, but also provides a lively introduction to Prado’s work. If, according to W. H. Auden, the real gift of a critic is not what they say but the excerpts of another’s work they curate for a reader, the excerpts chosen by Kaminsky do a great job of speaking for themselves:

With me it’s wild parties
or strict piety.
I didn’t deserve to be born,
to eat with a mouth, walk on two feet
and carry inside me twenty-five feet of guts.

Here is but a glimpse into Prado’s sensibility. In these five lines, one immediately senses the reckoning that infuses Prado’s work, a reckoning that would be light except for its underlying awareness of mortality. To add to Kaminsky’s analysis, I would argue that Prado’s work can be considered mystical for the way it lives vulnerably and exuberantly between life and death. It’s the kind of lyricism that cannot be taught, but rather caught and lucked up on.

Reading through this essay, I got the sense that Kaminsky has a clear idea of the precarious nature of this register of lyricism. His notes have the tone of a writer honoring the work of another not by arguing for it, but by speaking alongside it. It is in this spirit that the response below to the question “What are challenges in writing about Adélia Prado?” should be read.

Influence Question: What are challenges in writing about Adelia Prado?

Ilya Kaminsky: Spiritual thinker is someone who believes in the impossible.

Poet is someone who believes in the impossible via words that stun.

What saves A. Prado for that? A sense of humor.

Challenge in writing about it? Showcasing her sense of humor without making her sound glib.

On the page, Prado’s writing is elemental. It is straight out of earth, stars, water, lungs.

The challenge with elemental writing is to address it in kind.

So, the piece is a series of brief pieces connected by a bit of wind.

Ilya Kaminsky is the author of Dancing in Odessa (Tupelo Press) and Deaf Republic (Graywolf Press, forthcoming in March 2019). He is also the editor of Ecco Anthology of International Poetry (Harper Collins). With Jean Valentine, he has translated the poems of Marina Tsvetaeva, Dark Elderberry Branch (Alice James Books).