This week, I’d like to introduce a new type of feature on the Influence: community features. In these features, I’ll be promoting events put on by marginalized literary communities and spotlighting their efforts. If you have a community you feel should be highlighted, feel free to message me about it either on Twitter (@JoseAraguz) or email  (thefridayinfluence@gmail.com) 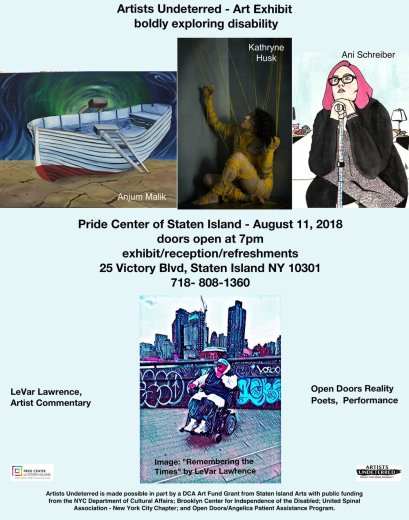 For this first community feature, I’m bringing attention to “Artists Undeterred” an art exhibit which opens at the Pride Center of Staten Island on August 11th at 7pm. The opening will feature artist commentary by LeVar “Var” Lawrence and a performance by Open Doors Reality Poets, of which Lawrence is a core member. To find out more about the event and explore links to the featured artists, go here.

This event came to my attention via Ani Schreiber, an artist whose work is part of the exhibit. I have had the honor of having Schreiber’s artwork feature on four of my chapbooks and all three of my full length poetry collections. Her work is marked by a rich directness steeped in realism, imagination, and vision.

For those who might not know, Schreiber is also my partner. We have been together for eight years, married for four of those. Over the years that we’ve been a part of each other’s lives, I have watched Schreiber come to terms not only with her disability but also with herself as an artist. Now, it is a problematic trope to discuss a disabled artist in terms of “bravery” or “admiration,” mostly because it fetishizes and condescends to people who are simply being people. So when I say that I have a great admiration for Schreiber and her work, it comes from a place of artist to artist and is informed by our personal history.

I have been there when she’s had to stop working on a project due to physical limitations and seen the frustration of those moments. I have also seen her suss out new mediums to continue at her work. Watching her do this navigating of the intersection where artistry and disability meet has resonated with me. There are lessons in perseverance that come with an artist’s life that don’t fit into instructional guides, and that drive home that you never know what a person’s been through to get to the creative act.

In the clip below which serves as an introduction to the Open Doors Reality Poets, Ramon “Tito” Cruz reads the following lines:

These lines point to the loneliness of hardship which the creative act acknowledges. Events like the “Artists Undeterred” exhibit create spaces where the art resulting from this acknowledgment is celebrated and seen.

To find out more about Open Doors, go here.