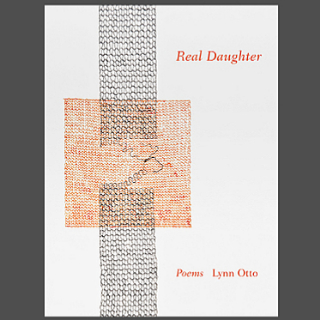 It seems simple to say that what words can point to and hold is a constant source of meditation for me and other poets. Yet, this type of meditation is a high stakes one as it is in contemplating what words can hold that one also necessarily reckons with what cannot be held in words. Reading through Lynn Otto’s Real Daughter (Unicorn Press, 2019), one encounters poems that make use of this meditative space to engage with human conflict.

One can see this in “Marcescence,” which opens the collection with a reckoning salvo:

The beeches’ light brown leaves in horizontal layers
like my mother’s tiered serving trays
artfully placed in the winter forest and here we are,
in another stupid tree poem, this one
about the difficulty of letting go of something already dead.

In these lines, Otto’s speaker braids the direct meaning of the its title — a word meaning “the retention of dead plant organs that normally are shed”* — with family narrative. The first three lines evoke the way memory blurs present moment experience as well as suggests the natural way one understands the world through story. The second line’s simile deftly places nature and family side by side, a juxtaposition further complicated by the return to nature imagery in the third line. The last two lines of this stanza add a further depth to the meditation so far with its metanarrative nod towards the tradition of nature poems. Aware that she finds herself “in another stupid tree poem,” the speaker meets the sentimentality risked in the first three lines with awareness. This awareness furthers the veracity of the poem, allowing the double-meaning of the fifth line’s phrasing “the difficulty of letting go of something already dead” to hit with a compelling lyrical conviction. This conviction is furthered in the second stanza through a listing of words:

Such a fancy word for it when it comes to trees:
marcescence. You could name a daughter that.
Unlike fury. Unlike grief.

Here, the move of braiding nature and family narratives is taken further through the act of naming. There is a telling distinction in the way this speaker considers “marcescence” fit for naming a daughter over the words “fury” and “grief.” Placing these words on separate sides and seeing one as suitable for public use implies a number of things for the other two words. That “fury” and “grief” are human emotions and, therefore, typically kept private due to societal norms; that these two emotions occur in our inner worlds, this versus the public display of marcescence in trees; that, perhaps, these two words in their charged and potent nature eschew the fanciness the speaker sees in marcescence; it is through these copious implications that the speaker’s emotional presence is evoked.

The way these lines evoke this presence is quick and powerful, true to the essence of lyric poetry. This mix of skillful phrasing, hard-earned human voice, and thoughtful imagery render and suggest worlds of meaning througout the poems of Real Daughter. As the poems move through narratives of the roles taken up in one woman’s life (that of mother, daughter, wife), there is always an urgent awareness to see and find enough words for the life lived (and potentially overlooked) outside these roles.

In “Maytag” (below), one can see a good example of Otto’s ability to create a multivalent, compelling speaker. As the poem develops around a narrative about the speaker’s father and mother disputing over a broken appliance, the details begin to color the speaker’s inner world and her handling of a dead bird. The effect of this coloring is evident in the turn in the last stanza as the speaker considers “If my daughter were here.” This speculation creates an emotional depth through its contrast with what actually is done in the poem.

The poems of Real Daughter thrive in this rich space between imaginative speculation and the “real” world of family narratives. As the speaker of “Marcescence” notes in that poem’s ending stanza:

Consider the clean white spaces
between each layer of a family tree.
It isn’t like that at all.

The move to complicate and disrupt accepted narratives implied in this last line underscores the whole of this collection. Through these poems, Otto not only makes clear that it “isn’t like that at all” but also faces what it is like while at the same time providing glimpses of what it could be like.

It can’t be fixed, says my father
of the dryer, the Maytag of many years—most
of their marriage—and the protest
of my mother, who can’t do laundry anymore anyway,
doesn’t stop him from having it hauled away,
ordering a Kenmore.

What he means is he can’t fix it. He has fallen
and what can a man do with a broken rib?
The third bird in two days hits the window and drops,
a rose-breasted nuthatch I place in a napkin,
but they won’t touch its fine fine feathers for fear of lice.
I’m to throw it in the bay.

If my daughter were here, she would bury it in a small box,
lined with a scrap of soft cloth.
But there’s no time for dead birds.
The crabs creep out sideways to clean up,
and my mother says to call the crematorium the minute she dies.
When the Maytag goes, she cries.

Influence Question: How would you say this collection reflects your idea of what poetry is/can be?

Lynn Otto: It seems to me that of all types of writing, poetry leaves the most space for the reader. I like reading and writing poems that give the reader not only sonic pleasure but also the pleasure of discovery–finding connections, layers, ambiguities, and so forth. I think the poems in Real Daughter allow those things to happen. My aim is that they welcome the reader in, and then trust the reader. I think most of the poems can be enjoyed by people who don’t have much experience reading poetry, but readers who want to will enjoy discovering more. The poems don’t over-explain. Neither do they preach or lecture, which brings me to another idea I have about poetry—that is, it’s a genre that generously accommodates uncertainty. A book of poems, even one that’s thematically tied together, can certainly cast about, and Real Daughter does.

Influence Question: What were the challenges in writing these poems and how did you work through them?

Lynn Otto: Ah, well, writing anything at all is a challenge for someone taught that it’s best to keep things to oneself, especially family matters. And the process of putting words on paper—was I writing about what I thought and felt, or were the poems deciding what I thought and felt? The chicken-egg conundrum. Since I was not in the habit of knowing my own mind, it was hard to know what was going on. I’m sure you’ve had the experience of a poem going in an entirely unexpected direction. Of course, although books of poems are classified as nonfiction, they’re certainly not all autobiographical. They are, first of all, made things. Still, at times I wondered whether the poems themselves were putting a spin on things, and were influencing my feelings, even my memories. I worried that family members would be upset. I ended up writing poems that cast doubt on other poems, in effect undermining the reliability of the main speaker of the book. Only then did I feel comfortable sending it out into the world.

It’s funny that the first word of the title is a proclamation of authenticity: “Real.” But the second word is “Daughter,” a word that for me, and I think for many, signals expectations of duty to others, not to oneself. There is a tension in the title that runs throughout the book, and that was also part of my experience of writing it.

Special thanks to Lynn Otto for participating! To keep up with Otto’s work, check out her site. Copies of Real Daughter can be purchased from Unicorn Press.

Lynn Otto is a freelance academic copy editor and writing mentor, with an MFA in creative writing from Portland State University (Oregon). Her work has appeared in Iron Horse Literary Review, Raleigh Review, Sequestrum, and other journals (see lynnottoinfo.wordpress.com), and her book Real Daughter, winner of Unicorn Press’s First Book Prize in 2017, was published earlier this year.

One thought on “microreview & interview: Real Daughter by Lynn Otto”