For this microreview & interview, I present close readings of two poems from JM Miller’s collection Wilderness Lessons (FutureCycle Press, 2016), as well as share some insights from the poet on the work in their own words. 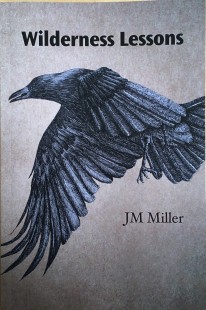 For fifty cents you can sharpen a fang,
sink your claw around the rifle’s trigger.

Take cover behind the bush, resist the rosemary’s
aroma, and sidle the plastic butt firmly to your shoulder.

Programmed sunset drips in the background, breathe
an arrow down the gun’s sight, you’ve been here before.

A deer hops through the pasture, nibbles oat straw,
looks straight up the rifle’s barrel.

Confess you love the composition, the way
it eases your senses into a finely tuned fork

banging against flawless crystal.
Confess you loved that talented seal on TV who gripped

in the lunchroom when you were ten. All red-faced,
asphyxiated, and wanting to die. We were all dreams then.

Shoot the deer. You shoot the deer, drop the rifle,
and leave the bar. Who knew she’d come prancing out—first right to left

then so innocently left to right, begging to be seen.
The landscape drew you in, made a promise.

You became the animal you were meant to be.

Miller’s speaker here wastes no time in bringing the reader into the details of the scene. Yet, it is the diction and the subsequent character of narration where the scene comes to life. The phrasing of “sharpen a fang” and “sink your claw” frames a casual first person shooter at an arcade into animalistic transformation. In doing so, the poem amplifies the reality being replicated in the arcade game and immediately points to its problematic nature.

This high stakes approach is pursued as the poem goes on describing the “Programmed sunset…in the background.” The vividness of description is echoed in the speaker’s statement, “Confess you love the composition,” making use of the intimacy of narration to highlight the seduction inherent not only in the play of the arcade game but in the images as well. If “fifty cents” allows one to tap into a more animalistic state, then it is a (re)turn to something already inside human nature, something as tied to human experience as a childhood memory. From the pixellated scene of the game to a pixellated scene of a seal drumming on late night TV, the poem shifts into a parallel that further complicates its meditation on play and performance. Here, the line “The seal’s name was Henrietta and you wanted to accompany her” is telling; in one line, the speaker both humanizes the seal-turned-spectacle but also lays bare a feeling of being caught up in the spectacle (much as the speaker is caught up in the game early in the poem).

Thus, the speaker’s narrative is charged with a mix of culpability and innocence which points to an awareness of the stakes behind man-made “games” and “shows,” and what they trigger inside. In this light, the speaker’s admission that “We were all dreams then,” feels both like an explanation and an excuse. When the speaker admits, “You became the animal you were meant to be,” a note of betrayal and conscience is struck that rings out beyond any pixellated screen.

This note of mortal reckoning is picked up at several points throughout the collection. In the poem “Desert Autopsy (2012),” Miller announces that “the poets have arrived…[to] stand here in the hollowed tree, / language unfolding like children.” The phrase “language unfolding like children” speaks to the sense of witness that poets seem capable of, a witnessing that keeps things new and fresh. An example of this “unfolding language” can be seen mid-poem when the speaker states:

What is the effect of drought?
ask the government buildings
drawing blueprints to save the world,

while a pinyon tree simmers in its bark behind a plexi tower.
It shrivels, starves, lets its branches down.

By placing the question in the mouth of the concrete, inorganic presence of “the government buildings,” Miller is able to work a startling juxtaposition into human terms. While the question’s rhetoric places drought in the realm of the abstract and theoretical, the poem’s emphasis on the pinyon tree image brings us back to solid, living material. In these two stanzas, the image of government buildings and trees sound out the physical absence of humans as well as the full presence of human development.

As in the previous poem, the speaker here is aware of their implied role in this scene. Yet, in this poem, the speaker is able to point to the possibility of expanding their role as witness when they answer the question regarding drought with their own: “I can’t climb this picture, but can you imagine it?”

This second question is a compelling and engaging moment in a poem, and collection, that shows the value and power of such imagining.

The harbor pulls in, pulls its sheet tight, pulling
the ground under.

I, too, bend my body in the lean
for wild. To walk away from the sea
is to be naked at wartime,
a gazing body.

I remember the wrecked season, white bone
of drought, fire opening its giant jaws in the west,
gypsy moths spinning cocoons of sorrow.

On the last day of the year, pinyons and junipers are dying.
Fences in Los Alamos still breathe fire.

What is the effect of drought?
ask the government buildings
drawing blueprints to save the world,

while a pinyon tree simmers in its bark behind a plexi tower.
It shrivels, starves, lets its branches down.

I can’t climb this picture, but can you imagine it?
You’ve seen the pinyon grow, twisting like wet laundry
devoted to the wind sculpting mesa and valley.

I’ve heard the trees roam at night, calling with their voices.
What was it, the solemn whisper,
What calling rubbed the wind, combed the wintering
pencils of grass, laid bare the open spaces. And then I knew

it wasn’t for me, not me on the wind, not for me
were the long shadows, invisible xylem of veins,
not mine the forged silver, fortune of stars.

Army, the poets have arrived, call your horses, call
the cavalry. Lick your feathers, stick them to the dying.

We stand here in the hollowed tree,
language unfolding like children. 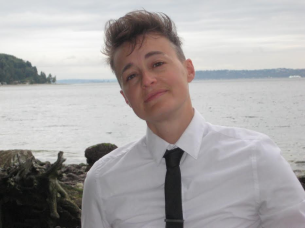 Influence Question: How would you say this collection reflects your idea of what poetry is/can be?

Poetry is an invitation to walk into an empty space of being. I wanted Wilderness Lessons to feel like an opportunity for a reader to walk into their own space and find themselves: their purest, most vulnerable self.

As a trans-writer, it is urgent for me to find myself in my work, it is a form of survival. I am looking for the self beyond labels and projections – the one free from attachments. When I started writing Wilderness Lessons several years ago I discovered a liminal space for existence. This would become known as the “Unbetween” – a place without relationality. I had been immersed in Brenda Hillman’s collection, Loose Sugar, and the poem “Unbetween” was a way for me to have a conversation with her work.

My hope is that “Unbetween” – which is not a space between things, but a liminal space, a nothing space, a no space – invites a reader’s pure spirit and phenomenology to the surface.

I remember reading a phrase from Adrienne Rich, that “poetry is not a healing balm,” nor many other things. But it does heal. It heals through a unique listening, an absolute presence. And it is my belief that as we heal ourselves, we gain the power to heal others, to heal the broken systems of our civilizations that enact oppression and violence against marginalized people and the planet and its beings.

Influence Question: What were the challenges in writing these poems and how did you work through them?

I got in my own way a lot throughout the writing of Wilderness Lessons, and most of that had to do with the need to dismantle the restrictions of what a poem can be or do. For instance, I admire ecstatic imagery and rational rhetoric, and I looked for ways to use them together in a lyric poem. Also, it seems like Round 7 of “End of the World” was the background hum to this collection. I was nearing a poetics of urgency, but still trying to have faith in representation and the lyric.

This book also marks a time of profound transformation in my life: getting comfortable with my trans identity, beginning to dismantle my white privilege, getting married, dedicating myself to teaching, living in a city and finding my way toward becoming an environmental activist. It was an urgent time, one of immense uncertainty. These poems were my way through the times in one’s life in which everything shows up and could be lost. These poems held; they found me and held on.

Special thanks to JM Miller for participating! Find out more about Miller’s work at their site. Wilderness Lessons can be purchased from FutureCycle Press.

Everything We Think We Hear

See the giveaway details
at Goodreads.