A few big changes have happened in my life that I am barely catching up on enough to relate here. The first is that I have happily accepted an Assistant Professor position at Linfield College in McMinnville, Oregon. I am really excited to be joining a stellar faculty at an institution known for cultivating a great intellectual and creative atmosphere. I am also excited to be back in Oregon, with its supportive and vibrant poetry community, bookstores, coffee (OMG, coffee!), and proximity to family.

What this big turn also means is that we’ve had to leave Cincinnati sooner than expected. The past few weeks have had us cleaning and packing and cleaning again, until we landed in Oregon last week. Hence, the catching up (with consequent catching of breath).

Along with all the moving work, I have also been working with FutureCycle Press and placing the final touches on Small Fires, which is due out next week. More details to come.

Big moves like this one always take me back to this week’s poem by Richard Tillinghast. Tillinghast’s meditative lyric hooks into the symbol of “big doors” and deftly begins to weave various narratives of “Many things never to be seen again!” The energy and clarity of this particular line does the work of bringing the reader closer to the poem, the speaker seeming to be on the level of awed gossip as they relate the rich details and images that follow. As the poem ends, the reader themselves has been on a ride, ruminating alongside the speaker, and, like them, knowing both a bit of what has passed and that there remains so much more they cannot know. 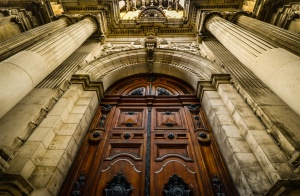 I have seen with my own eyes doors so massive,
two men would have been required
to push open just one of them.
Bronze, grating over stone sills, or made of wood
from trees now nearly extinct.

Many things never to be seen again!
The fury of cavalry attacking at full gallop.
Little clouds of steam rising
from horse droppings
on most of the world’s streets once.

Rooms amber with lamplight
perched above those streets.
Pilgrimage routes smoky with torchlight
from barony to principality through forests
which stood as a dark uncut authority.

A story that begins “Once upon a time.”
Messengers, brigands, heralds
in a world unmapped from village to village.
Legends and dark misinformation,
graveyards crowded with ghosts.

And when the rider from that story at last arrives,
gates open at midnight to receive him,
two men, two men we will never know,
lean into the effort of
pushing open each big door.

P.S. The Influence is now considering poetry submissions. Check out the “submissions” tab to learn more.