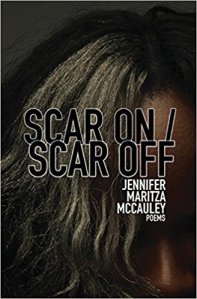 In my recent microreview & interview of Jennifer Maritza McCauley’s Scar On / Scar Off (Stalking Horse Press), I noted the recurring themes of witness and presence throughout the poems. These themes are not mutually exclusive in the poems, rather, they exist side by side, creating meaningful friction and nuanced depths. Today’s poem, “Some Advice,” is also from McCauley’s collection and is  a good example of these creative engines at work.

In the poem below, a speaker recounts the “advice” given to them by a man. The move to relate the man’s statement not in his voice via quotes, but instead through the narrative framework of “He says” allows for a distance that disrupts the power of what is said while at the same creating a space in which what is said can be interrogated. The man’s statements, which are charged with danger, threat, gender stereotypes and double standards, are braided with the speaker’s inner responses.

These inner responses trouble the already troubled conceit that these statements are “advice.” The true nature of the man’s statements is unfurled throughout the movements of the poem. From the first stanza’s misguided take on accountability which shames the speaker and their physical presence (“your joyful teeth are enough to / jail you in consequence”), to the admonishment and threat of the last lines, witness and presence work together to evoke the mortal threat this speaker lives under in society and also subverts that threat into a poem that forges awareness out of lived experience.

He says you have it coming
because you smile
too-big at the Papis and gals and no matter
the meaning behind that smile, baby,
your joyful teeth are enough to
jail you in consequence.

He says whatever happens
when he releases me into the wet night
after a weird beer or somekinda wine
is my own fault, that I can’t blame my
body-losses on the black city or briny Caribbean
night.

He says that’s your problem –
the happy in your front teeth,
the way your purpl’d hips coil and flick,
it doesn’t matter if you see themboys spirit
before body, themboys don’t see
spirits and yes, babygirl:
they are looking at you.

He says what I should see first
is men-eyes and lusty sweat bundled
on men-foreheads and he says
if I wear shortskirtstightjeans and themboys
reach out and snatch me from red alleys,
that’s on me. And by the way, he says,
if you don’t bite hard enough
when they catch you, baby,
you’re a fucking whore.

Scar On / Scar Off can be purchased from Stalking Horse Press.

One thought on “one more from jennifer maritza mccauley”