Earlier this week, I had the opportunity to do a small reading at Linfield College’s Miller Fine Arts Center. The Linfield Gallery is in its last week of hosting Antonio Martorell’s solo exhibit “Rain/Lluvia.” In talking about the origins of the exhibit, Martorell told Linfield Gallery: “When the opportunity came my way to bring an exhibition to Oregon, a place that I had never visited before, I candidly asked: ‘¿Qué pasa en Oregon?’ (What happens in Oregon?) I received an equally candid answer: ‘It rains every day.’” 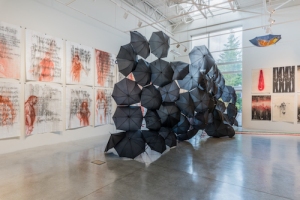 In this spirit, I selected poems from my own work that dealt with rain in one way or another, in Oregon and rains elsewhere as well. Along with “Thinking About the Poet Larry Levis One Afternoon in Late May” by Charles Wright, I read two poems by Alejandra Pizarnik, both in the original Spanish and in English translations I did specifically for this reading. I share both poems and translations below as well as a clip of my reading of “L’obscurité des eaux.” Pizarnik’s work felt appropriate for the space as it interrogates the ways meaning is made, engaging with the ephemeral nature of words.

Rain works with a similar ephemerality. There is only something we can call rain when water is in motion between sky and earth; similarly, poetry lives in the space between set words and the motion of reading.

Special thanks to Brian Winkenweder for the invitation to read and to all those who attended!

An abandoned fire kills its light.
A bird in love raises its song.
So many avid creatures in my silence
and this little rain that accompanies me. 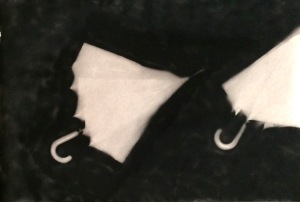 The darkness of the waters
— translated by José Angel Araguz

I hear the water that falls in my dream resound.
The words fall like water I fall. I draw
in my eyes the shape of my eyes, I swim in my
waters, I tell myself my silences. All night
I hope my language manages to configure me. And
I think about the wind that comes to me, remains
in me. All night I walked in the unknown rain.
I have been given a silence
full of forms and visions (you say). And you run desolate
as the only bird in the wind.

José Angel Araguz’s most recent collection is An Empty Pot’s Darkness (Airlie Press). His poetry, creative nonfiction, and book reviews have appeared in Prairie Schooner, Poetry International, The Acentos Review, and Oxidant | Engine among other places. He blogs at The Friday Influence. José is an Assistant Professor at Suffolk University where he serves as Editor-in-Chief of Salamander and is also a faculty member of the Solstice Low-Residency MFA Program. View all posts by José Angel Araguz

2 thoughts on “raining with Martorell & Pizarnik”