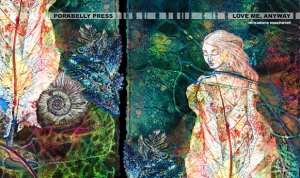 In my recent microreview & interview of Minadora Macheret’s Love Me, Anyway (Porkbelly Press), I spent time unpacking the collection’s interrogation of disbelief and the role it plays in living with disability. From the disbelief of medical professionals too quick to dismiss a person due to age and gender, to the personal disbelief of someone with PCOS struggling through the body and life changing symptoms, Macheret’s poems track the path of coming to terms with this condition. In delving into her experiences with PCOS (polycystic ovary syndrome), Macheret makes use of context and phrasing to create poems whose clarity is charged with human consequence.

The poem “Woman with PCOS Describes Aversion to Tests” (below), is a good example of this kind of clarity. Here’s the second stanza:

Nurses prickly and sweet
stick needle after needle
into scarred flesh. There is no blood left,
no room to take me into,
where my hormones are not abnormal.

Here, the first three lines do two different things. First, they present wordplay in the way nurses are perceived as “prickly and sweet,” language that suggests the act that follows of having needles stuck into “scarred flesh.” Second, this wordplay is layered over the direct imagery of these lines, providing an emotional charge along with a clear visual. This clarity is then developed further in the following lines. Specifically, the logic of there being “no room to take me into, / where my hormones are not abnormal” is a powerful statement, made so through the contextual work the phrasing is doing. While the immediate context of the poem is a doctor’s office, the phrasing of these last two lines evokes a much larger context and makes clear the weight of the speaker’s experience, not just in the moment, but in her life.

This work is echoed in the closing lines about the heart: “this muscle beats irregularly / as long as it doesn’t stop, I’ll be fine—” Here, there is a mix of speaking of the heart in medical terms in one line and speaking of it in more ambiguous terms in the second. Yet, this ambiguity, instead of obscuring what is meant, adds richness and depth. Ambiguity is invited into the poem through phrasing that makes clear the high stakes involved for the speaker. The phrase “I’ll be fine–” here is disrupted from its typical casual meaning by being part of a line that reckons with mortality. Having life and death in one line, then, parallels the speaker’s experience and brings us back to the title. Here, the tests are the practical medical procedures, but also the tests of living with a hard-earned clarity.

Each cold chair haunts me,
staples past bodies & decisions
to the over-waxed floor.

Nurses prickly and sweet
stick needle after needle
into scarred flesh. There is no blood left,
no room to take me into,
where my hormones are not abnormal.

There never is an answer
just test the body, so the doctors know
it’s still living.

My breathing is slow,
as the stethoscope pierces my heart
this muscle beats irregularly
as long as it doesn’t stop, I’ll be fine—

Copies of Love Me, Anyway can be purchased from Porkbelly Press.