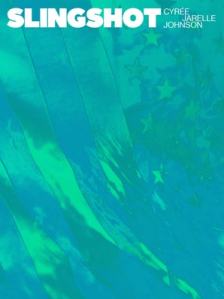 There’s a moment toward the end of the sequence “a machine of mahogany and bronze I” in Cyrée Jarelle Johnson’s debut poetry collection Slingshot (Nightboat Books) where, in the aftermath of a protest demonstration broken up by police brutality, the speaker is asked “You heard about the storm comin’?” which prompts them to meditate on:

The same storm slicing
through every inch of armor
my binder becoming more unbearable as the sun sets.

Yes. I knew about the storm coming.

This admission coming when it does at a moment of reflection and recovery is charged with an awareness that the literal storm of the poem runs parallel to the metaphorical storm of the political moment they are living in. The articulation of this awareness, here and elsewhere, is tinged not with resignation but resolve. This mix of awareness and resolve runs through this collection in stunning and complicated ways.

Whether awareness and resolve play out in expressions of self-presence, as in “false sonnet embroidered w/ four loko empties” which opens the collection and whose ending states: “I’m a full grown / whatever-the-fuck, and I will devour any / attempt to subdue me with monstrous animality,” or in poems troubling current staples of pop culture (as in the poems “a review of Hamilton: An American Musical” and “chewbacca was the blackest part of The Force Awakens“), Johnson enacts a lyric presence that engages through juxtaposition of tone and phrasing. In “chewbacca,” for example, the speaker riffs on the Star Wars mythos, braiding in commentary about race like “When we colonize the stars, everyone will be beige, / white folks sometimes say, or orange” and placing them next to others like “Chewbacca was the blackest part of The Force / Awakens. Always moaning & never understood. Always hunted & never going home.” This braiding makes the speculative nature of science fiction all the more human while also interrogating the implications of George Lucas’ vision. The projection of blackness onto the Chewbacca narrative, which is one of survival, parallels that of the speaker who shares at the end, “…I am just too tired. Too vengeful to go anywhere anymore.” This statement’s honesty is a surprise as it comes at the end of a poem that strips away much of the fiction of the film in order to get at the deeper implications for the speaker.

Awareness and resolve in the service of self-revelation, ultimately, is where Slingshot lives. My sense, though, is that Johnson would have readers be mindful of the difference between self-revelation and traditional ideas of confession in poetry. While the poems evoke the trials and tribulations of sex work and the intersections of being black, disabled, femme, and genderqueer, these poems work toward a visceral clarity. Rather than hold the reader’s hand and explain the complexities of the world they’re drawn from, these poems present themselves on their own terms and trust the reader to keep up. It is in this aspect that the poems point back to the title, in a way, each one a stone shot out to strike at the consciousness who hears it.

To return to the sequence “a machine of mahogany and bronze I”: The line “we will hold the line as a practice of freedom” is said by the speaker mid-protest. This collection shows Johnson holding the poetic line in a myriad of ways that open up the nuances of awareness and resolve. In the poem below, “jersey fems in the philly zoo,” this work is done through image and imagination, each surrealistic turn interrupted by a harsh reality. By the end, it’s clear that fear is one of the many things Johnson holds the line against.

a flamingo knows,
even without pink lipstick,
fem is a feeling.

fly from Johnson Park,
arrive, then turn up their beaks
‘fuck dis sposta be?’

they inquire. I
find cover in the leopard
print fem next to me

refracting the light
in your life. no. it’s not you.
they look to consume.

especially spring,
and when the ice cream melts
before it’s lapped up.

Philadelphia
is lilac and lightning strike
before a great storm.

they look to consume.
they desire to control.
predatory birds;

eagles, owls, all.
swooping down with catching claws,
no glass to hide you.

I want my armor
an exoskeleton, tough
hewn of crushed velvet

bristling with defense
a kevlar of tenderness
enveloping me.

this is what happens
when the tree blooms: the axeman
runs to chop it down.

this is what happens
when creatures meant for the deep
somehow crawl ashore:

knives licking their necks
the scent of wisteria
fireworks: flash/bang.

flash fire, roll flame
clip wings from those who maim us
declaw them all, bare.

maybe they will burn
corralled, while lights dance in sky.
steaming macho ash.

and if they must live
then make me invisible.
hide me. erase me.

To learn more about Cyrée Jarelle Johnson’s work, visit their site.
To read an interview with Johnson where they discuss the poem above and Slingshot in general, go here.
Copies of Slingshot can be purchased from Nightboat Books.