The beginning of the school year for me is always a time of advice. New students come into the fray of doing the work to better their lives via education, making the necessary sacrifices of time, energy, and finances. It’s a sensitive position, and I work hard to be sensitive to it. Whether the topic is making decisions about what classes to take or simply a poem or essay they are working on, one of the things I think I’m guiding a student towards is intuition. I figure if a person learns to listen to themselves and hear what they already know, they’ll be that much more aware of what they don’t know and how to seek it out. 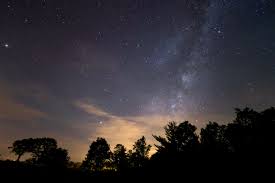 This week’s poem – “The Journey” by Mary Oliver – is a poem that I associate it with this kind of intuition and listening. The poem is grounded in a narrative that is richly ambiguous; the choice of the second person “you” address brings a reader close to the stakes of the poem while the language is kept in a register that is accessible and fluid. Yet, rather than fall into any cliches about “journeys,” the poem creates a creeping urgency through its physicality. A house “trembles”; something “tugs” at the ankles; and by the end, the you is striding forward with a newfound conviction, if not confidence.

This poem, in particular, is a favorite because this feeling I’m attempting to describe remains consistent over my twenty years of admiration and rereading. The poem lives in a lyrical mode that asks the reader to be present in themselves, a position where all strong writing – and living – begins.

One day you finally knew
what you had to do, and began,
though the voices around you
kept shouting
their bad advice–
though the whole house
began to tremble
and you felt the old tug
at your ankles.
“Mend my life!”
each voice cried.
But you didn’t stop.
You knew what you had to do,
though the wind pried
with its stiff fingers
at the very foundations,
though their melancholy
was terrible.
It was already late
enough, and a wild night,
and the road full of fallen
branches and stones.
But little by little,
as you left their voices behind,
the stars began to burn
through the sheets of clouds,
and there was a new voice
which you slowly
recognized as your own,
that kept you company
as you strode deeper and deeper
into the world,
determined to do
the only thing you could do–
determined to save
the only life you could save.

The end of summer is a ways off, but with the start of school there is a change in summer’s energy at least. For me, I’m bracing to become some version of those balloon figures you see at car dealerships, the ones that are flung in various directions depending on the wind. That’s what teaching mode is like for me, lots of energy and enthusiasm. 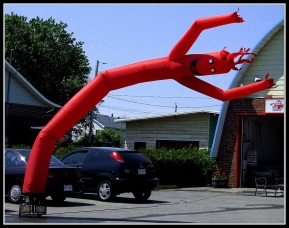 It’s a mixed blessing, though, as there is a part of me this time of year that wants to stand back and reflect. Could be my birthday, could be the looming end of summer, could be knowing that what happens during the semester is a huge shift, and I don’t love change. I’m reconciled to it, and I love teaching. But yet there’s an unnameable feeling that comes.

This week’s poem – “Summer Song” by William Carlos Williams – touches a bit on what that unnameable feeling might be like. Through the personification of the moon, Williams builds a short narrative whose logic leads up to a compelling closing image and thought. I consider the closing question from a grounded place, but am lifted by it nonetheless.

Wanderer moon
smiling a
faintly ironical smile
at this
brilliant, dew-moistened
summer morning,—
a detached
sleepily indifferent
smile, a
wanderer’s smile,—
if I should
buy a shirt
your color and
put on a necktie
sky-blue
where would they carry me?