I haven’t shared one of my lyrical alignments in a while, so I’m excited to share this one. I’ve also gone ahead and created a new category for them on the side there, so one click can take you to my collective formal experimentations across the years. 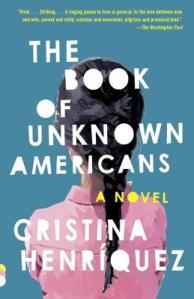 This week’s lyrical alignment comes from Cristina Henríquez’s novel The Book of Unknown Americans (Knopf). While the novel’s main narrative details the migration and lot of the Rivera family who come to America from Mexico to find a school that can accommodate their daughter, Maribel, who has suffered brain damage from an accident, the novel also presents the stories of the neighborhood the family finds themselves becoming a part of. These “unknown Americans” hail from a variety of countries and represent a spectrum of latinidades; each one tells their stories in every other chapter. Henríquez’s gift for voice is evident in these monologues that go into the struggles of migration and survival.

When I do a lyrical alignment, I first find a passage of prose that calls to me on the level of language: a range of lyrical turns, an engaging metaphor, or, as is the case here, strong voice. I then try to find a phrase I connect with sound-wise. Here, I was caught by the natural pause at the end of “street” in the first six words. From there, I rewrote the excerpt in my notebook, making sure to keep each line to six words. To my surprise, the full excerpt I was writing out naturally ended in a six word phrase. I’m still spooked by the serendipity of it.

Aside from the lyrical quality of the voice and prose, this excerpt also hit home in that it has a character following a line of thinking that I am familiar with, in particular the feeling of being both “seen” and not “seen” at the same time. This kind of stereotyping/profiling very much makes one feel unmistakably “unknown.” Henríquez’s accomplishment in this passage is the evocation of a voice; the argument remains personal while creating a space where the reader can dwell alongside the character.

When I walk down the street,
I don’t want people to look
at me and see a criminal
or someone that they can spit
on or beat up. I want
them to see a guy who
has just as much right  to
be here as they do, or
a guy who works hard, or
a guy who loves his family,
or a guy who’s just trying
to do the right things. I
wish just one of those people,
just one, would actually talk to
me, talk to my friends, man.
And yes, you can talk to
us in English. I know English
better than you, I bet. But
none of them even want to
try. We’re the unknown Americans, the
ones no one even wants to
know, because they’ve been told they’re
supposed to be scared of us
and because maybe if they did
take the time to get to
know us, they might realize that
we’re not that bad, maybe even
that we’re a lot like them.
And who would they hate then?

Image description: A screenshot of a tweet that reads: I stand in solidarity with @danielpollackpelzner & the students of @linfielduniv affected by previous & current transgressions. Linfield broke my heart & it nearly broke my soul. Believe marginalized voices when they speak up, not the voices that speak over them.
Post virtual reading vibes. Had a blast at the @pangyrus_litmag reading tonight! (Image description: a piece of paper with two poems on it and a book on top of it left on a table). #poetry #poem #poesía #poetrycommunity #joseangelaraguz #thefridayinfluence #literature #reading #writing #byhand #amano #latinx #friends #poetsofinstagram #words #creativewriting #micropoetry #poet #igpoets #igwriters

Image description: A screenshot of a tweet that reads: I stand in solidarity with @danielpollackpelzner & the students of @linfielduniv affected by previous & current transgressions. Linfield broke my heart & it nearly broke my soul. Believe marginalized voices when they speak up, not the voices that speak over them.
Loading Comments...
Comment
×
%d bloggers like this: