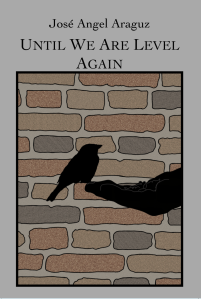 I’m happy to share that my third poetry collection, Until We Are Level Again, is officially out from Mongrel Empire Press! It’s available for purchase here.

This collection incorporates excerpts from my first chapbook, The Wall (Tiger’s Eye Press), into a sequence of poems that engages further with ideas of language, identity, family, work, and death. I am excited to have it out in the world and hope you check it out!

Special thanks to MEP editor Jeanetta Calhoun Mish for working with me on this project and to Anthony Frame, Robin Carstensen, and Octavio Quintanilla for their wonderful blurbs. Thanks as well to Adeeba Shahid Talukder and Brian Clifton for close reads of the manuscript in its final stages. Thanks also to Ani Schreiber for the digital sketch that adorns the cover.

To celebrate the book’s release, I want to share the poem from which the book title comes from. This poem means a lot to me on a formal and conceptual level: formally, it is one of my breakthroughs in my work with syllabics, a poem where all the experimenting feels like it pays off (at least to me). Conceptually, there is a clarity to what the poem says that remains complex. I’m not trying to praise my own work; rather, the last line was one that surprised me when I revised into it. It appeared on the page as if I had placed it there in another life.

The Broken Escalator at the Train Platform – José Angel Araguz

When something like this breaks, it means
we must swarm around the narrow
stairway, our steps slower, the pace
set according to our sighs. Each
glance and gesture becomes a word.
My looking down and waiting speaks
to the old woman next to me:
after you. All the stars left in
the sky, all the calls and blinking
messages, the wintered sorrow
of all passing thoughts must now wait
until we are level again –
wait as we take turns returning
to our lives. When something like this
breaks, it means the words I wanted
to write before are different from
the ones I have got down for you.
These words are older than you think.

originally published in The Boiler