This week I’m sharing another installment archiving my Instagram poetry project entitled @poetryamano (poetry by hand). This account focuses on sharing poems written by hand, either in longhand or more experimental forms such as erasures/blackout poems and found poems.

Below are highlights from June 2017. This month found me going further with erasures. Along with continuing to work out of a true crime book, I also did three tarot-themed erasures.

Be sure to check out the previous installments of the archive – and if you’re on Instagram, follow @poetryamano for the full happenings.

[On the above two pictures: The Hanged Man was the first card I felt connected with in tarot. My wife drew it for me before a trip during a difficult time in my life. I was to be on my own, and the card asked me to ground myself (thaw out) in my writing. It was a powerful experience.]

[On the above picture: Found poem made, literally, by hand (my hand’s blocking the rest of the text).] 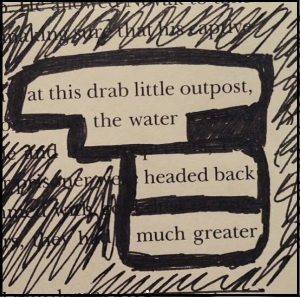 [On the above two pictures: Continuing with the tarot-themed erasures, here is IX The Hermit. I’m connected to this card in three ways, and its message of being a beacon for others means a lot to me, especially during times where I find myself naturally at a distance from others, or simply not fitting in. My wife took the card photo in answer to the question “Which card would you date?” Bless her for hanging out with me on the mountain. Also: My big ol’ noggin is in caricature in the background of the second pic! ] 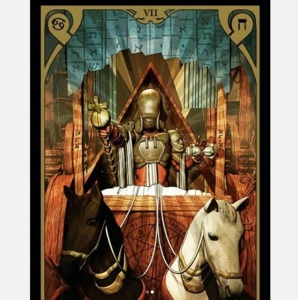 [On the above two pictures: Another tarot-themed erasure, this time focusing on the Chariot and the idea of motion in my writing. That each poem is a response to a belief, in the word and myself.] 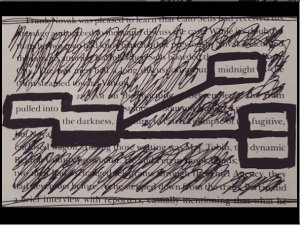 José Angel Araguz’s most recent collection is An Empty Pot’s Darkness (Airlie Press). His poetry, creative nonfiction, and book reviews have appeared in Prairie Schooner, Poetry International, The Acentos Review, and Oxidant | Engine among other places. He blogs at The Friday Influence. José is an Assistant Professor at Suffolk University where he serves as Editor-in-Chief of Salamander and is also a faculty member of the Solstice Low-Residency MFA Program. View all posts by José Angel Araguz