They staunched the wound with a stone.
They drew blue venom from his blood
……….until there was none.
When his veins ran true his face remained
lifeless and all the mothers of the village
wept and pounded their chests until the sky
………..had little choice
but to grant their supplications. God made
………..the boy breathe again.

God breathes life into us, it is said,
only once. But this case was an exception.
God drew back in a giant gust and blew life into the boy
and like a stranded fish, he shuddered, oceanless. 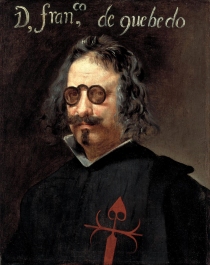 Francisco de Quevedo, my bespectacled friend above, was known for having a life philosophy which, at its core, believed that we begin dying the moment we are born. One could argue that this is simply a way of choosing a side in the old “is the glass half full/half empty” query. There’s a subtle, complicated optimism, though, to his statement, that is easy to miss. One gets a better sense of the man’s thoughts in another quote:

Which roughly translates to: Dust be , but dust in love .

2015 was a tough year. About midway through, I found myself in the hospital due to some stomach issues. Having one’s life fall from them, even for a moment, is humbling. On the ground, in the dust, humbling. But then, as this week’s poem describes, there is the “giant gust” that brings us back to life, and returns us to our dying. Ahmed’s poem wins me over each time I read it for the way life is evoked in several actions, and moves from reality and rite to a hopeful, complicated reconciliation.

As the first week of the new year ends, I want to wish all of you who pay me the compliment of visiting this blog and visiting my poems the best in all aspects of your lives. I wish you another year of being dust, but dust in love.