One of the things to note about this week’s poem, “A Note Downriver” by Marilyn Hacker, is its use of Sapphic stanzas to evoke longing via nuanced meditations. A Sapphic stanza, named after the Greek love poet Sappho, consists of three lines of eleven syllables each (with stresses on the first, fifth, and tenth syllables) and a truncated fourth line of five syllables (stresses here on the first and fourth).

In light of the complexity of this stanzaic structure, I can’t help but marvel at Hacker’s use of it here in a poem essentially about a hangover. The stress on the first syllable of each line adds a troubled conviction to the speaker’s voice; their ruminations come off in a controlled yet shaky manner. This shakiness is augmented by the form, leading to such lyrical utterances as: “I feel muggy-headed and convalescent, / barely push a pen across blue-lined paper.”

The leap in phrasing and logic here evoke a struggle beyond language. At the precipice of articulation, articulation feels hindered; “push” is echoed by the nearby “scowl” and the later “grouse” and “growl.” This reading of echoes is furthered by the ending metaphor of rivers speaking, literally having the last, troubled word.

Afternoon of hangover Sunday morning
earned by drinking wine on an empty stomach
after I met Tom for a bomb on Broadway:
done worse; known better.

I feel muggy-headed and convalescent,
barely push a pen across blue-lined paper,
scowl at envelopes with another country’s
stamps, and your letter.

Hilltop house, a river to take you somewhere,
sandwiches at noon with a good companion:
summer’s ghost flicked ash from the front porch railing,
looked up, and listened.

I would grouse and growl at you if you called me.
I have made you chamomile tea and rye bread
toast, fixed us both orange juice laced with seltzer
similar mornings.

We’ll most likely live in each other’s houses
like I haunted yours last July, as long as
we hear rivers vacillate downstream. They say
“always”; say “never.”

Earlier this week, I had the opportunity to do a small reading at Linfield College’s Miller Fine Arts Center. The Linfield Gallery is in its last week of hosting Antonio Martorell’s solo exhibit “Rain/Lluvia.” In talking about the origins of the exhibit, Martorell told Linfield Gallery: “When the opportunity came my way to bring an exhibition to Oregon, a place that I had never visited before, I candidly asked: ‘¿Qué pasa en Oregon?’ (What happens in Oregon?) I received an equally candid answer: ‘It rains every day.’”

In this spirit, I selected poems from my own work that dealt with rain in one way or another, in Oregon and rains elsewhere as well. Along with “Thinking About the Poet Larry Levis One Afternoon in Late May” by Charles Wright, I read two poems by Alejandra Pizarnik, both in the original Spanish and in English translations I did specifically for this reading. I share both poems and translations below as well as a clip of my reading of “L’obscurité des eaux.” Pizarnik’s work felt appropriate for the space as it interrogates the ways meaning is made, engaging with the ephemeral nature of words.

Rain works with a similar ephemerality. There is only something we can call rain when water is in motion between sky and earth; similarly, poetry lives in the space between set words and the motion of reading.

Special thanks to Brian Winkenweder for the invitation to read and to all those who attended!

An abandoned fire kills its light.
A bird in love raises its song.
So many avid creatures in my silence
and this little rain that accompanies me.

The darkness of the waters
— translated by José Angel Araguz

I hear the water that falls in my dream resound.
The words fall like water I fall. I draw
in my eyes the shape of my eyes, I swim in my
waters, I tell myself my silences. All night
I hope my language manages to configure me. And
I think about the wind that comes to me, remains
in me. All night I walked in the unknown rain.
I have been given a silence
full of forms and visions (you say). And you run desolate
as the only bird in the wind.

This week I’m sharing the second installment archiving my Instagram poetry project entitled @poetryamano (poetry by hand). This account focuses on sharing poems written by hand, either in longhand or more experimental forms such as erasures/blackout poems and found poems.

I’d like to give a quick thank you to Kenyatta JP García for giving @poetryamano a shout out here.

Below are the highlights from February 2017. Be sure to check out the first installment.

In February, I had been coming back to rain and mirrors in my free writes. I always worry about retreading, but then some words and images are like worry stones, no?

Translation: Alejandra Pizarnik’s poems are full of a tense intimacy, like each word could say everything, so we gotta be careful with them. The hardest line to translate here was the first, specifically the phrasing of “sin para qué, sin para quién,” which translates as “without a reason, and for no one,” sense-wise. But I like the whimsy of “what/whom” and feel it’s in keeping with Pizarnik’s overall punk vibe. 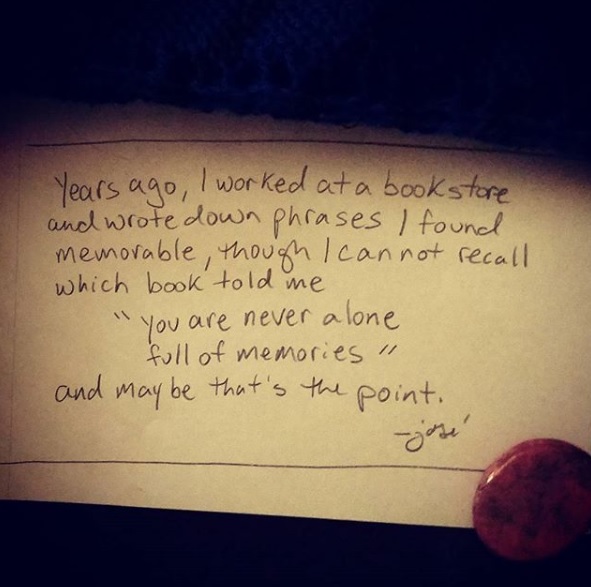 True story. I was working on a poem when I came across a draft that had the quoted text above in the middle of some rough writing. The quote stuck with me for a few hours, yet I couldn’t remember the source. So I decided to go the haibun-like route of including this story of the quote while letting the quote shine in its own space. I like the result, despite the poem showing how flawed my own memory is – and again, that could be the point, no, that words last?

Those fragments on the side are from a hematite ring that broke a month ago. Found out recently that these rings break for two reasons, the brittleness of the metal, and when they have absorbed too much negativity. Words work in the same way, able to hold what they can, until they can’t.

Talismans: The absence of my father growing up comes in and out of my poems. It’s an influence like weather, which changes. He died when I was six, but left my life earlier. In response to my worries about writing too many poems about this absence, someone called it a talisman of sorts, something I carry in the presence of these words. 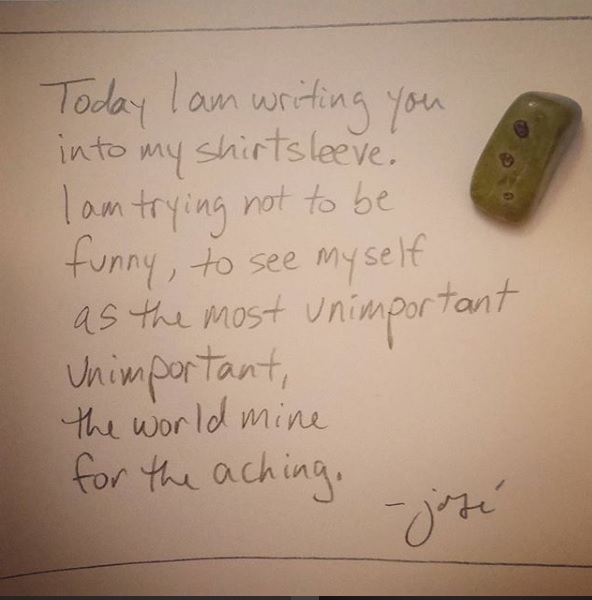 Throwback to the original version of a line that made its way into my book, Everything We Think We Hear (Floricanto Press). It got revised into: “Stay with me, love, the world is ours for the aching” which is recalled by the speaker of the newer poem as lines he used to say trying to be slick. True story.

When you write poems in more than one language, you realize quickly how what you are really doing when you write is translating something yet spoken inside you into a shape and expression. Here, I like how the filter places a bit of light in the space between the two versions of the poem, light like a fingerprint itself.

February brought my first attempts at erasures/blackout poems for the poetryamano project. My first attempts, like here, were done on my phone, using photo studio to mark out words. This one reads: “the real world / dwells in the / absorption of passion, / And / mirrors it” – From The English Renaissance of Art by Oscar Wilde. 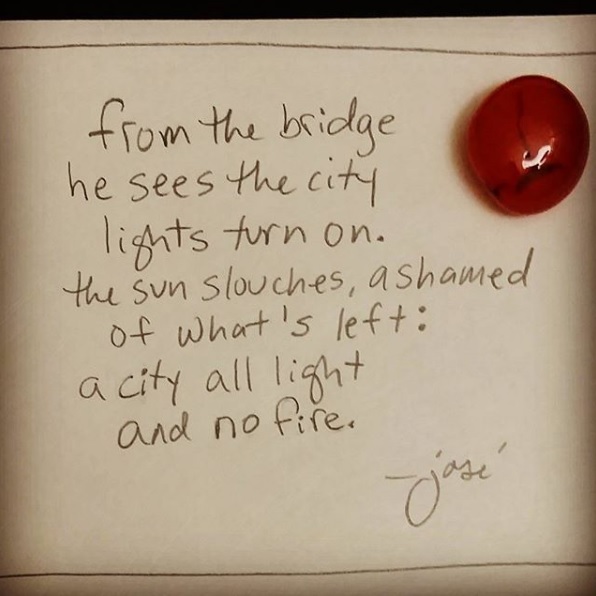 This last one of the month comes from a time when I’d walk around all poet-lonely, then go home and write poems about walking around being poet-lonely. We all went through that, right?

Just a quick post to share this clip of me reading my poem “Flea Market” which will be featured in the next issue of The Inflectionist Review!

Thank you to John Sibley Williams and A. Molotkov for the opportunity to put these words on the air!

This week’s poem is the first poetry feature drawn from submissions! For guidelines on how to submit work, see the “submissions” tab above.

Often when I read a love poem, I find myself most invested in what the poem evokes in terms of connection and disconnection. Love poems aren’t love, but are expressions of the world around a love relationship, a world made up of inside jokes, shared intimacies and understanding. The reader of a love poem is privy to something akin to gossip and confession, and involved in an engaged listening.

This week’s poem, “When We Are Too Tired to Fall in Love” by Oka Bernard Osahon, is a great example of a poem that makes the world around a relationship come alive for the reader. Line by line, the speaker of this poem engages the narrative of their relationship through imagery. Lines like “I felt the cold retraction / Beneath the glare of tossed hair as you carried the pages of your face away,” which moves from the visual “glare” to the tactile “pages” in its efforts to render a passing moment, run on an engine of imagery. Yet, the use of “pages” also implies change, and creates a sense of urgency.

The poem continues in lines that reach for similar turns of understanding. The use of imagery gives a sense of control in a poem that digs into the feeling of a relationship slipping out of one’s control, from connection to disconnection. Similar to “pages,” the use of the word “show” in the final line rings out beyond itself, reflecting on the relationship and the moment, as well as the fact of the poem itself.

We laughed without moving our lips –
Our eyes – signs of joy fading – crowfeet wrinkled gaze.
We taped our selves together within the ineffective hug of weathered arms
And our thoughts shivered between us like a ghost trying to stay alive.
Our feet carried us away from our shadows – excuses and regrets limping behind
And when you stumbled into me on the steps, I felt the cold retraction
Beneath the glare of tossed hair as you carried the pages of your face away.
We lost a moment, when we could have found a tiny piece of what was lost.

We are unraveling even as I speak,
Like a single thread off the warp and weft of the table cloth
That hold the old china your mother gave you.
We are bartering words for points and we have lost so much in this match.
There was meaning in our trading once – with loud voices and broken fragile things
But now the words are bland and though we have not grown carapaces,
We are too worn out to fight the hurt. So we sit on the couch – two distant halves
Watching a show that used to make us laugh.

Oka Benard Osahon is creative writer, poet and fantasy novel addict from Benin, Edo State, Nigeria. He attained his B.A in English and Literary Studies at Delta State University, Abraka. His poetry can be found on Brittle Paper, Kalahari Review, Praxis Magazine Online, Spillwords and Visual Verse. He was one of the winners of the Praxis Magazine Online 2016 Anthology Contest as well as the winner of the June 2017 Edition of the Brigitte Poirson Poetry Contest. He lives and works in Abuja where he writes at night after work. He can be reached at Twitter: @serveaze