This week’s poems are drawn from the poetry feature submissions! For guidelines on how to submit work, see the “submissions” tab above.

This week I’m excited to share two poems by Luis Cuauhtémoc Berriozábal. The first “Escribeme / Write Me” (below) is presented in both Spanish then English. Work presented bilingually always interests me as I take note of the word choice across translations.

Here, the word “coloreame” stood out first in Spanish as it is a variation of the verb “colorear.” In the Spanish alone, there is an emphasized intimacy in moving between “colorear” and “coloreame.” The difference in sense between the words translates essentially as “colorear / to color” versus “coloreame / color me.” The directness of this change is in keeping with the theme of the poem as it is a speaker asking to be written.

This move in Spanish from the distant vibe of “to color” to the more direct “color me” is evoked in English by Berriozábal’s choice of rendering “Coloreame” as “Animate me.” Reading across languages, I feel both a surprise and familiarity in seeing this translation. Surprise, because of the variation in word choice; familiarity because of how apt the word choice is in carrying over the poetic sensibility of the Spanish version. “Animate” carries with it its own intimacy, similar to the move from “colorear” to “coloreame,” as it is a word that evokes a specific urgency, one that is life or death. The speaker, in fact, feels as if they’re dying; to be (re)animated is the desire.

In “Book Without Feelings” (also below), this meditation on life and death continues from another angle. Here, the reader is presented with the scenario of a book able to read a human person. This relationship of the inanimate book reading the animated human self is intriguing in how it subverts our sense of meaning-making. Rather than reading a book for meaning, a book reads the speaker and undergoes a meditation of something beyond animation. The narrative that develops around the “story” of the speaker’s death, in a way, enacts the meaning-making act and finds that meaning is in short supply within a mortal context.

The casual quirkiness of this scenario allows us as readers to be surprised by how the speaker’s meditation hits in a severe way at the end. While the logic of a book not having feelings makes immediate sense, the comparison of this unfeeling state against that of a corpse drives home what is lost in death. That the book is left behind able to be used for meaning-making, but only by an animated self whose ability to make meaning is temporarily and mortally limited — this is where this poem took me. The surprising nature of this ruminative reading experience is a gift, one in keeping with the heart of lyric poetry.

Write me
I, too, want to be a poem
Spell me out
With the ink of a star
Animate me
With small brush strokes
Bring me joy
Because I’m dying of sadness

The book reads me.
It reads me as if I’m dead.
I’m the hero
who has run out of breath.
It is a load
of baloney. The book
reads about the dead man.

The battle was lost
and a corpse was created.

This was no poetry book.
It was not an autobiography.
The heart gave out.
The book read about
the insects at my grave
soaking in the sun above
and the gaseous fumes below.

The book closed the book.
It did not feel sadness.
It was just a book,
a book without feelings.
At least it was not a corpse. 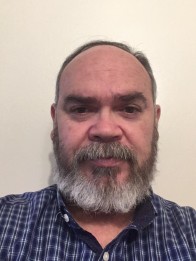