As the year ends, I find myself amidst so much newness: new job, new city, new friends and faces in my life. I am still catching up with it all. It’s the kind of upheaval and momentum that makes me return to poems in a specific way; mainly, to relearn how to listen.

I was reminded of this idea of listening while reading an interview with Jane Hirshfield earlier this week:

What is the most important thing to do when reading a poem?**
Listen, without worrying too quickly about whether you understand or not. Give yourself over to a poem the way you give yourself over to your own night dreaming, or to a beloved’s tales of the day. And then, try to listen first to a poem the way you might listen to a piece of music — the meaning of music isn’t some note by note analysis or paraphrase, it’s to find yourself moved.

To sit back and be witness to a singular circumstance. To be still, and reflect only after all has been said. These are skills in life and in poetry. 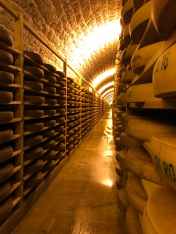 Hirshfield’s knack for listening is on full display in this week’s poem, “Sheep’s Cheese.” This short poem accumulates its narrative details slowly, doles them out line by line with the same care as is being described. It’s the kind of lyric nuance that can be missed out on if read too fast.

There are resonances in poems and in life that are felt even without our knowing. Same as the man in the poem, whose arms “know the weight” of a weekly task, there is a part of us listening and tracking the effect of nuances, even when we’re busy looking away.

In the cellar, sheep’s milk cheeses
soak in cold brine.
Once a week, a man comes to turn them.
Sixty pounds lifted like child after child,
lain back and re-wrapped
in their cloths on the wooden shelves.
The shelves are nameless, without opinion or varnish.
The wheels are only sheep’s milk, not ripening souls.
He sings no lullabye to them. But his arms know the weight.

**Check out the rest of this interview with Hirshfield here.

2 thoughts on “listening with jane hirshfield”