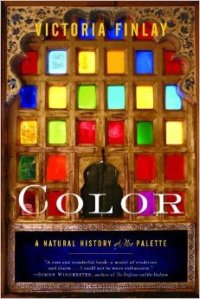 This week’s post features a lyrical alignment of an excerpt from Victoria Finlay’s book Color: A Natural History of the Palette. This is the kind of nonfiction book that tries to break down information through story and personal recollections. Finlay writes of her travels to the places where particular colors are made and goes into the details of their physical and historical make-up.

I read this book back in 2012 and still find myself citing several of its jewels of knowledge with people. One particular moment in the book lends itself to being read on its own like a poem. In the excerpt (lyrically aligned below), Finlay recounts one scientist’s metaphorical explanation of the color of the sky. Enjoy!

The Color of the Sky

“…to explain the color of the sky, [John Tyndall, nineteenth century British scientist] would use an image of the sea.” (from Color – Victoria Finlay)

Think of the ocean, he would say,
and think of the waves
crashing against the land.

If they came across
a huge cliff
then all the waves would stop;

if they met a rock
then only the smaller waves
would be affected;

washing against the beach.
This is what happens
with light from the sun.

Going through the atmosphere
the biggest wave lengths –
the red ones –

are usually unaffected,
and it is only the smallest ones –
the blue and violet ones –

which are scattered by the tiny
pebble-like molecules
in the sky,

giving the human eye
the sensation of blue.
Tyndall thought

it was particles of dust
which did it;
Einstein later proved

the blue rays
and leave the rest alone.